A Tomb with a View – Crown Hill Cemetery

A cemetery may seem an odd, or even creepy, choice as a recommended site, but Crown Hill Cemetery in Indianapolis is unique.

It’s like a vast, outdoor history museum. The rolling terrain encompasses over 500 acres and 25 miles of paved road.

Crown Hill Cemetery was dedicated in 1864 and now contains over 200,000 grave sites. If you are a Hoosier, you will see many familiar names from local business icons to Mayors, Governors, Vice Presidents – and even U.S. President Benjamin Harrison. The notorious gangster John Dillinger was buried here in 1934. His grave marker was replaced numerous times as souvenir hunters continually chipped away pieces until they were unusable. The grounds also contain Crown Hill National Cemetery. It is the final resting place of over 2000 soldiers from the Civil War through Vietnam. 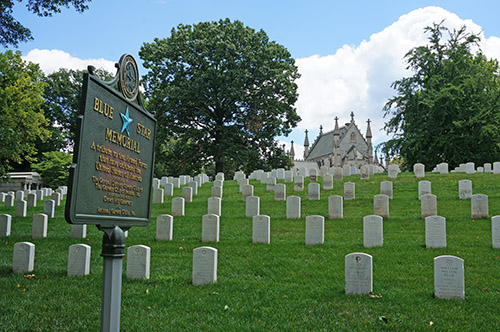 The National Cemetery began as a relocation of Union soldiers from Greenlawn Cemetery, which no longer exists. The 1.4-acre site in on a hillside behind the Gothic Chapel. The Chapel itself is a beautiful historic structure built in 1875. 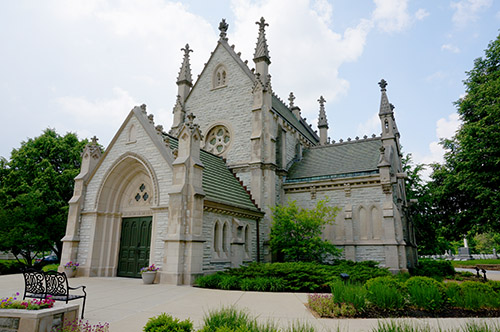 But, based on the name, one would assume there’s a Crown Hill in here somewhere? And, you’d be right. Located on the western side of the main cemetery, The Crown was the highest natural point in the city limits, prior to the Unigov consolidation of 1970. If you venture to the top of The Crown, you can pay your respects to beloved Hoosier poet, James Whitcomb Riley. Riley’s tomb is at the very top of The Crown and is arguably the most visited spot in the cemetery. Standing at the base of The Crown, it doesn’t look too intimidating. But, it’s a nice little workout getting to the top. Don’t worry, you can also drive if walking is too taxing. Riley’s tomb is just beyond view.

Once you’re at the top, you will be rewarded with a fabulous view of downtown Indianapolis. 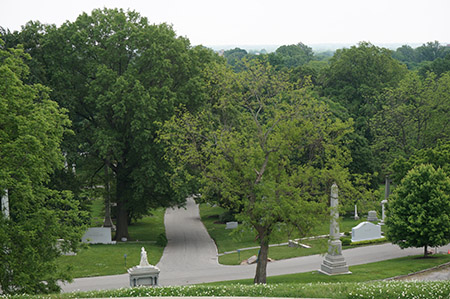 And a sweeping panorama from south to north. And we’ve just scratched the surface here. You can make a tour of the trees alone. The oldest are tagged and identified. Crown Hill offers numerous guided tours, but free wandering has its own rewards. Again, 25 miles of paved road. You can easily get lost inside. I have been asked on several occasions for directions to the exit by lost sightseers.

The wooded areas are home to 35-40 white-tailed deer. They stay hidden during the day, but I have seen them on numerous occasions. One particular sighting was very memorable. As I was rounding a gentle bend, I noticed movement in the distance. The road was progressing towards the movement and I gradually made out a group of 9 deer huddled together. And I was very aware that 18 eyes were watching my every move as I passed by.

And, don’t forget to check out the original main gates on the east side at 34th Street. Dating from 1885, this gothic portal is no longer the main entrance, but it remains one of the most impressive structures on the grounds.

Beautiful, historic buildings, inspiring landscape and even the occasional wildlife sighting all combine to make Crown Hill Cemetery one of my favorite places.