I have always said that, when it comes to snacks, I prefer salty to sweet. So, for me to recommend a candy company says something about the experience.

At first glance, Schimpff’s Confectionery in Jeffersonville Indiana is very much like many candy shops in tourist areas. What is different here is the history and the charm.

If you have occasion to be in the Louisville area, and have a little spare time, hop back north across the river to Jeffersonville and head to the historic downtown district. Follow the signs to Schimpff’s. It’s tiny. It’s quaint. It’s often crowded. Call ahead to see if you can schedule a candy-making tour. It’s free! Or, just show up on a Saturday afternoon and you’ll most likely join one in progress. Then get ready to step back in time. 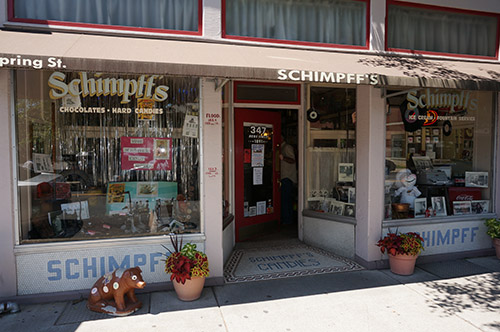 Schimpff’s opened in 1891 and, four generations later, this family business is still going strong. Current owners Warren Schimpff and Jill Wagner Schimpff purchased the business in 1990 and continue to offer local favorites that built their reputation throughout Kentuckiana for over 100 years. 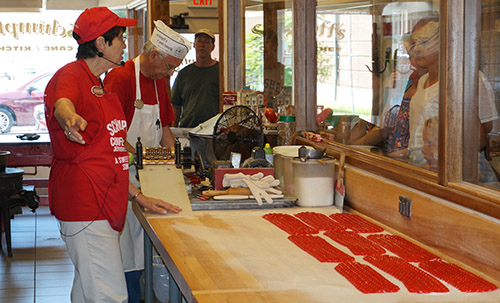 Schempff’s has been famous for their cinnamon red hots since they opened and the family recipe is still used today. The vintage equipment has been given a modern boost with an electric motor, supplanting the hand crank. Other than that, you truly get the sense of old school candy making and, the best part, you get to sample the goods fresh from the molds.

The store sells all manner of hard candys and chocolates. Try the local favorite, the Modjeska, named after 19th century Polish actress Madam Helena Modjeska. She was asked by a Louisville confectioner, following a performance in Louisville in 1883, if he could name a confection after her. She readily agreed and a local favorite was born. The story alone means you should try them.

Don’t get me wrong, Schimpff’s is not the caliber of destination to plan a day around. It’s a small candy store with a small museum and a candy-making tour. But, if you are passing through the area on interstate 65 and need a break, it’s worth it. I’ve been there four times, so far, and always enjoyed the visit. I can’t recommend the Modjeskas since I’m not a marshmallow fan (my kids like them), but try some cinnamon red hots or chocolate covered cashews, yum.