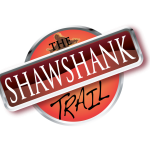 The Shawshank Redemption ranks high on many film fans’ favorites lists. It remains #1 as voted by IMDB users. http://www.imdb.com/chart/top So, I won’t bother with a review of the plot, characters, etc. You already know it. What I want to talk about are the film’s locations. Shawshank was filmed in Mansfield Ohio and locations close by. The biggest character in the film, next to Andy and Red, is the Ohio State Reformatory, which became Shawshank Prison for all exteriors and several interior scenes. The actual cell block in the film was built as a set and shot elsewhere. But, the beautiful exterior, and crumbling interior, are stunning to see. In fact, the city of Mansfield has wisely decided to embrace Shawshank fans by inviting you to tour the Shawshank Trail. The trail is a self-guided driving tour through Mansfield and nearby towns to view 14 filming locations from The Shawshank Redemption. Recently, my wife and I took a drive through the Shawshank Trail. While we didn’t make it to all 14 sites, we saw enough to satisfy our inner film geeks. We began at Shawshank Prison. 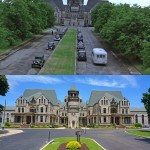 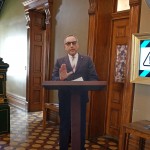 I’ve made a number of composites showing film clips next to the actual locations. Here is the opening shot of the prison from the film. It’s interesting to note that there seems to be an additional structure at the front of the building. I don’t know if that was built for the film, or was part of the prison that was later removed. The Ohio State Reformatory is open for self-guided tours. Expect to spend a couple hours at least. It’s a big place. Once you exit the gift shop with ticket in hand, you are greeted by Warden Norton. Then, get ready to descend into the depths.

On Apollo 11, astronaut Buzz Aldrin described the moon as “magnificent desolation.” That phrase 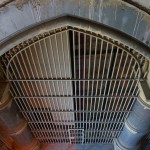 is the first thing that came to mind upon seeing the inside of the reformatory. But, magnificent decay would be more accurate. Every surface is cracked, peeling, crumbling and rusting in such a way that it’s almost beautiful. Like the wreck of the Titanic out of water. It’s like discovering a long forgotten gothic dungeon. 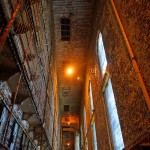 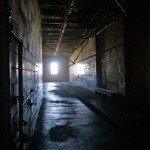 There are large common areas such as the library, showers, kitchen, etc. But the biggest, and creepiest, attractions are the massive cell blocks. There are the east block and the west block. They differ slightly in size, age and design, but they are both chilling to walk through. Most cells are open, inviting you to enter if you dare. Apparently, ghost sightings are quite common here. We can report a ghost-free visit, however, I don’t think I’d want to be stuck here alone at night. 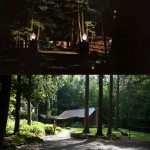 Now, on to some specific filming locations. Moving chronologically through the film, we start with the Pugh Cabin. This is the site of the murder for which Andy is accused. It’s in the woods at Malabar Farm State Park in the city of Lucas.

The intro to the prison is above, so next is the scene where Andy looks up at the towering building as he enters Shawshank.

I thought I had the right spot for that scene, but I later realized that the entrance is in the back of the building. The grounds behind the building are off limits for tourists, so this “almost, but not quite” view is the best I could get. Many of the exterior scenes for the film were shot behind the prison in the courtyard. We were told the courtyard no longer exists. I believe the main reason it is blocked off is to prevent photos being taken of the current Mansfield Correctional Institution behind the reformatory. Any windows facing the Institution had notices that photography in that direction is strictly forbidden. 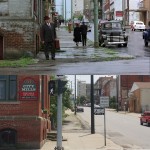 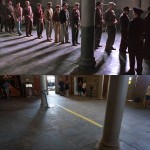 Next, we have the interior room where new prisoners line up to meet the warden. The posts look original, but the line has probably been repainted numerous times. Next, we jump to a few locations in downtown Mansfield for Brooks’ release from prison. We first see him timidly trying to cross a busy street. It’s fun to see that very little has changed in 20 years. The sidewalk is in better shape now. 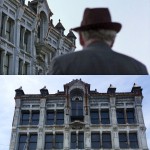 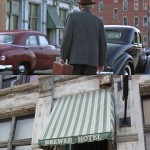 Brooks makes his way to the Brewer Hotel, which is actually the historic Bissman Building. It too looks almost exactly the same today, although I’m guessing that awning is a replica.

Brooks enters his shabby little room, but now we jump back to the Ohio State Reformatory. The scene was filmed in this room, but all of the original set dressing and furniture probably left with the filming crew. None of the furniture matches the film. 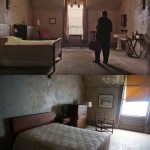 Finally, we take a stroll to the city park to feed the birds and hope Jake will stop by to say hello. But, he never does. This park is again in downtown Mansfield. It’s the original bench, but it’s not in its original location. They built a gazebo where the bench was located, so it was moved to a different side of the park. Still fun to see. 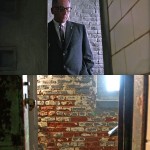 Now, back to Shawshank and Andy’s time in solitary confinement. Those scenes were shot in the actual solitary cells at the reformatory and that whole section of the prison is intense. I actually snapped this shot from inside one of the solitary cells. Not the exact one Andy was in, since no window is 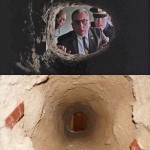 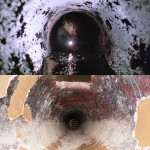 visible in the film. After his time in solitary, Andy decides it’s time to escape Shawshank. He climbs through the tunnel he has dug through his cell wall and then through a long sewer pipe. Both of those set pieces were props created for the film, and both were left behind so we can see them today.

We again make a jump forward to when Red is released from prison. His post-prison journey starts as a mirror-image of Brooks’. Same hotel room, same job, same despair. But one thing keeps him from giving in to the despair or falling back into crime. A promise he made to Andy to find an oak tree next to a rock wall in Buxton and see what’s buried under a large chunk of volcanic glass at the base of the wall. Red’s journey begins with the purchase of a compass at a pawn shop.

That shop is now Carrousel Antiques in, yet again, downtown Mansfield. About the only thing remaining to verify the location are the buildings in the 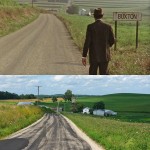 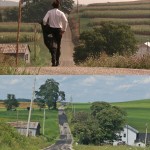 background. With compass in hand, Red hitches a ride out into the country and is dropped off on the road to Buxton. This rural intersection is in Butler Ohio. Of all the locations, I found this simple intersection to be the most magical. Red’s journey is one of my favorite scenes, and the shot of him walking off down the road is so beautifully done. And, adding to the magic, when we arrived at the intersection a young couple was admiring the view. I walked towards the intersection with my camera when the young man drops to one knee and proposes! No kidding! I really felt like I was intruding, so I congratulated them as I walked past on down the road, following in Red’s footsteps. As I was heading back to the car, they asked me to take their picture and the young man asked if I was a big Shawshank fan. We struck up a conversation about our mutual love of the film. He had hoped to pop the question at the location of the oak tree, but was told by someone at the prison that the tree was gone, having been destroyed in a storm. So, the road to Buxton had been choice #2. I was disappointed to hear about the tree since that was our next planned stop. 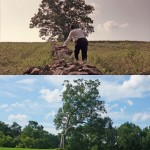 We went to look anyway since the Malabar Farm cabin was at the same location. To our surprise, the tree’s death had been greatly exaggerated. I was split in a storm a few years back, so it’s about half the size it used to be. But, it’s still THE tree. It is on private property, so it’s impossible to get a picture at the same view as the film. Humorously, as we were leaving the Malabar Farm site, the newly engaged couple drove in to take a look.

After receiving Andy’s letter and invitation to join him in Mexico, Red makes the decision to “get busy living.” He etches his name in the same beam that Brooks used to hang himself. This is back in the Brooks room set at the prison. The etched writing is clearly different, which makes me wonder if it’s even the original beam, or a recreation?

The final location we sought out occupies only a few seconds in the film. Red is on the bus 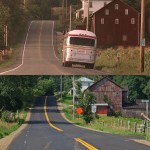 headed to Texas with dreams of the future. This stretch of road with its curvy hill and red barn is in Butler Ohio. The barn is in need of fresh paint, but everything is still the same otherwise.

We spent the better part of a day on the Shawshank Trail and there were other locations we skipped such as the bank Andy visits after escaping and the court house used for his trial among others. If you’re a fellow Shawshank fan, I highly recommend taking the tour yourself.