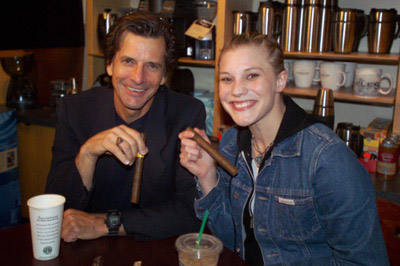 The Currency of Battlestar Galactica.

Everything about the new series was epic. It redefined what could be done with sci-fi on television. Time Magazine, The National Review, Rolling Stone and New York Newsday proclaimed it the best show on television. It was sci-fi to be sure, but it was a character-driven drama first. I really wanted prop pieces from this show. Unfortunately, the most desirable items were beyond my skills to create, but I did purchase a few nice replicas. However, the paper currency used on the show had a very intriguing design. This was something I could create. Several fellow fans began making replicas of the bills. But, much of their work was based on guesses since definitive reference material did not exist. But that was about to change. 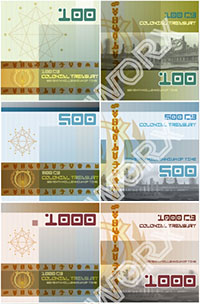 In 2008 with Galactica winding down its final season, it was announced that all the props from the show would be auctioned. The auction site posted a few photos as teasers. One of the photos was a lo-res, watermarked version of the graphic file used to print the currency (shown at a reduced size on the left). They were very small, but the absolute best starting place for recreations. So, I began. The biggest hurdle with these bills was recreating the cityscape. The best reference (right) was a start, but it was difficult to make out details.

Some fans had simply substituted real cityscape photos while others tried to clean up and actually use this reference graphic. I knew the only way to do this was to build up a new file of this city piece by piece. I even toyed with the idea of building it as a 3D model, but quickly abandoned that. It would be done in Photoshop and it was, by far, the most difficult part of the bills to get right. But, once completed, the work was worth it.

It adds a lot to the replicas. To witness my level of insanity, down the right side you can see all the Photoshop layers that went into the creation of the city. This is ONLY the city as I built it in a separate file before compositing it into the bills. And here is a shot of the finished city.

So, my bills were complete. They were a close match to the initial graphic and I offered them for sale at the largest online prop community, 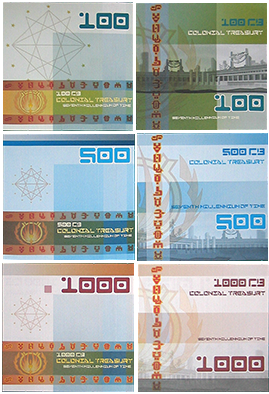 the Replica Prop Forum (the RPF). I sold a few sets and was pleased. Then, the actual prop auctions began. I realized that if I could win an auction for actual, screen-used bills, my replicas could be perfected. So, I watched every week hoping the bills wouldn’t be too expensive. But, they always were. Fans were eager to pay high prices to own a piece of this show. Then I received an email from a fellow member of the RPF. He said he had won a couple auctions for Galactica bills and was hoping to win more. He asked if I’d be interested in refining my bills with his assistance. Certainly! I asked if he could possibly send high-res scans of the bills so I could see all the details up close. He replied back that I was misunderstanding him. He was offering to actually ship the bills to me. I was stunned and readily agreed!

So, over the next few months, he would ship me one bill at a time. In case the shipment was lost or damaged, he would only lose a single bill (which was well insured both ways) instead of all three. I salvaged what I could from my original files, but basically, I was starting over. The cityscape was remarkably close. It did need some revisions based on seeing the details of the real props, but nothing too drastic. However, the color scheme was a big surprise. Either the original graphic posted by the auction house was an earlier version of the file, or it was altered during printing. But the bills I was seeing up for auction, and then in person, were quite different. Also not visible were small metallic flecks throughout the bills. Unfortunately, this was a feature I was unable to duplicate. I searched for a long time (as did others) and could not find a match for the paper with the flecks. But after months of working on every detail, the new, improved bills were complete. Shown below are my replica bills next to the actual, screen used bills. The screen-used bills are on top with my replicas below. 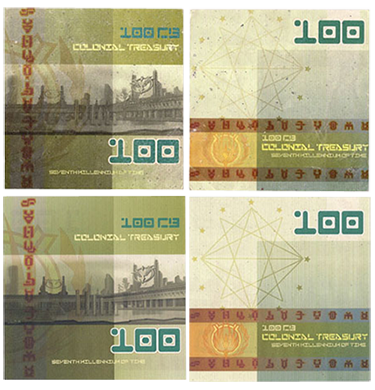 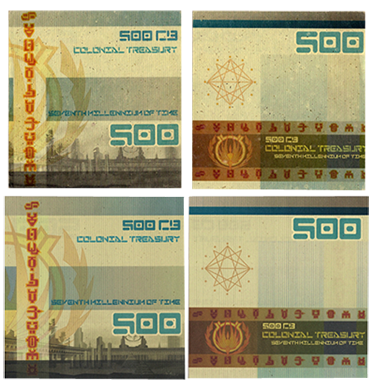 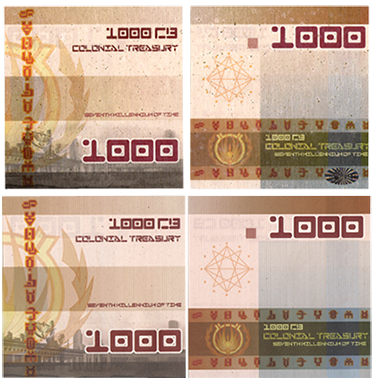 The prop bills from the show were often trimmed so that details were chopped off. You can see examples of that in the originals shown here. Also, the auction house placed a small holographic sticker on the back of the 1000 note. It was not present on the bills used during the show. I sold a few more sets of bills (some to previous customers) now that they were more accurate. Then I received several requests for aged bills. The examples of screen-used bills I received had been in beautiful condition, which was great because I could really see all the details. But, many of the bills in the auctions, and used on the show, were thoroughly distressed and weathered. I too wanted some aged bills for myself, so I began experimenting with various methods. The screen-used bills were not heavily stained or torn, they simply looked well-used. I eventually settled on a four-step process to wear down the bills and give them an authentic look. And here are some samples. 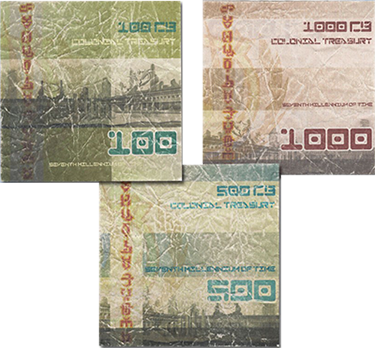