The Recreation of the Map from “Time Bandits!”

With a little help 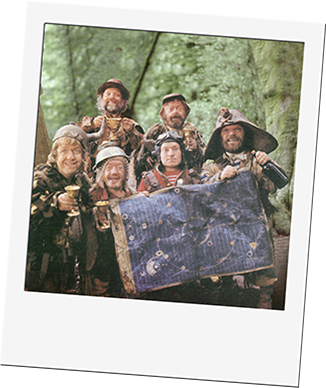 I grew up loving Monty Python. I still do! So, naturally, when members of the Python troupe ventured into other projects, I followed right along. So, when Terry Gilliam’s Time Bandits was released in 1981, I was there. Loved the film – even the off-beat ending. And, as someone who was soon to begin a career in graphic design, I really wanted a copy of the map of the universe from the film. 26 years later, I decided to make my own. And I received some help from a surprising source.

My interest in this map was rekindled in 2001. I’d been a fan of movie props for some time and frequented a couple web forums devoted to the subject. A board member announced his plan to recreate the map. It looked promising and took quite a while. When it was finally complete, it’s price tag was beyond my meager budget. But, I was inspired. I began collecting all the reference material I could find. In 2007, I began making my own map. But first, some background info.

“You see, to be quite frank Kevin, the fabric of the universe is far from perfect. It was a bit of a botch job you see. We only had seven days to make it. And that’s where this comes in. This is the only map of all the holes. Well why repair them? Why not use ’em to get stinking rich?”
– Randall, self-appointed leader of the time bandits

There were at least two different versions of this map created for the film. The map used during filming and handled by the actors exhibits different detailing and color than the map seen during the credits sequences. My map would replicate the prop used during filming. My personal theory on the different props goes like this. They created the map for filming and it took quite a beating. They may have had multiple versions there too as that’s generally the practice in case a prop is damaged or lost. After filming wrapped, they needed a map for the credits sequence. They rolled out the film map and realized it was not in the best shape. So, at that point they created a new map. It’s a very close match but not exact. Another big giveaway that they are different props is that the map seen during the film only has the clock panels on the left side. See the photo above from the famous Polaroid scene. However, the map seen during the credits has clock panels on both sides as seen below in a shot from the end credits. Note that the map is slightly cropped at the top and bottom in this shot. 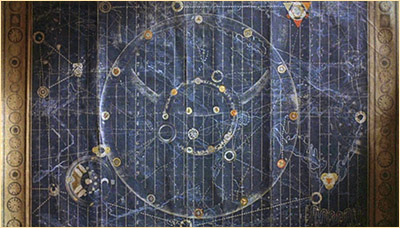 One source I found stated that the maps were created by Terry Gilliam himself. Given his talent at art and animation, this is not surprising. Gilliam created the animation sequences in Monty Python. It is believed that after filming, Gilliam kept one map and his production partner (and former Beatle) George Harrison took the other. It appears that the filming map went to Harrison while Gilliam kept the newer map used for the credits sequence. I have no idea what media or materials were used on the original map, but I’d love to find out some day.

I decided my map would have clock panels on both sides. I hoped to sell some prints of these when completed and thought having the clocks on both sides would give the most options to buyers. I began recreating the map in Photoshop. I spent about two months on the project. I kept finding details on the original that I missed. The Photoshop file was becoming enormous. Because I needed to keep elements separated for ease of future editing, the file ballooned to 188 layers with an overall file size of 1.72GB! 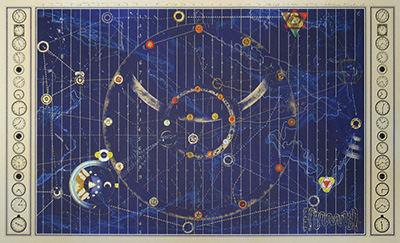 Once the file was complete, I had a print vendor produce a sample on canvas material. It looked impressive! You can see subtle differences in positioning of objects and colors by comparing my map on the right to the credits-sequence map above. In particular, note the color differences of the triangular graphic at the upper right. I had hoped to sell a handful of maps to help me justify all the hours spent. But, I knew if I never sold a single map I still had mine, which was the main goal. Another concern with selling maps is that, by that time, there had been two fellow fans who had made and sold replica maps. I worried that everyone who wanted one had already purchased one of the earlier versions.

By far the largest web forum for movie props is the Replica Prop Forum (the RPF). I had been a member for years. This forum is vast and its membership includes the casual fan right up to guys building props for the movies. You will see things on the RPF you won’t see anywhere else. It’s just an amazing place to be. And, they have a “For Sale” forum. So, I posted the map and received a handful of orders right away. Soon after, I received an order and an email from a fellow RPF member named Adam Savage.

“These maps are amazing. Just gorgeous! I own four of these.”
– Adam Savage, Mythbusters

Now, this part is embarrassing (and I’ve never mentioned this to Adam), but when Adam contacted me I only knew of him from postings I saw on the RPF. I just don’t watch much TV and I had no idea I was emailing the co-host of Mythbusters. And, to his credit, Adam never mentioned the show or came across as anything but a fellow Time Bandits fan. Adam said he loved the map and he had ordered two for himself. He then informed me that he had assisted in the creation of an earlier fan-made map – the very map that inspired me to start mine. That original map went through several rounds of improvements as better source material was found. Adam created some of the graphics for it (specifically the clock panels) and had been obsessed with the map since he saw the film. Adam asked if I’d be open to some constructive criticism. He recommended some color tweaks, more variance in the style of the clocks and also some random variance in the map’s background color. This added some depth to the map. When Adam saw a proof of the changes, he ordered two more. Once he received them, he proclaimed my version to be the very best he’d seen. Shortly after that, I discovered Mythbusters and became a huge fan of Adam. And, if you want to see the level of Adam’s obsessive attention to detail, watch this Fantastic YouTube Clip 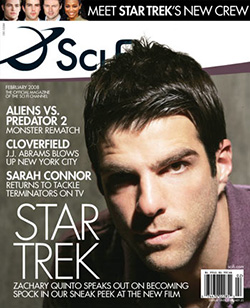 ! was selling maps to numerous fellow fans who were also industry insiders. I sold maps to guys who were FX artists at ILM and Pixar in California and Weta Digital in New Zealand. I sold a map to Mike Liebhold with an intriguing mailing address at the “Institute for the Future.” I contacted Mike about his job and we discussed the map at some length. Mike’s good friend and associate David Pescovitz is a co-editor of boingboing.net – one of the most heavily-trafficked blogs in the world. David saw Mike’s map and was compelled to post it on boingboing. He also included extracts from our emails in the article. That generated more orders!

“I gasped when I saw it. It’s stunning!”
– David Pescovitz, Co-editor – Boing Boing

I was next contacted by one of the biggest movie-geek sites around, AintItCool.com. They featured the map in their Christmas gift guide for 2007. Finally, I was contacted by Sci-Fi Magazine and the map was featured in a small blurb in their February 2008 issue. So, basically, it was a hit! Over the first few months, I made several rounds of revisions. Some were things I’d missed and others were feedback from fellow fans. I believe this is the most detailed and accurate replica yet created. 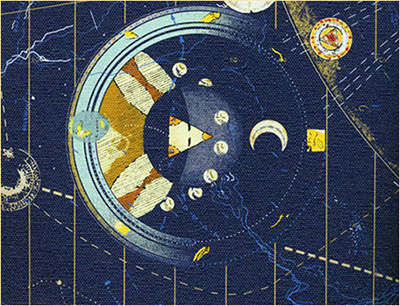 Maps are available at the Metropolis store at etsy.com. Just click the etsy button below. Maps measure 40 inches by 24.5 inches and are printed on a matte-surface, fine-art canvas with a high-end giclee printer. Both the ink and canvas are archival for decades under most display conditions. The finest details of the digital file are duplicated as can be seen in the close-up to the left. Maps are shipped via USPS and rolled in a sturdy mailing tube.