Remembering the “Marvel” of Oz.

The Wizard of Oz has so many memorable moments. One of them has always been when Dorothy happens upon Professor Marvel’s wagon with it’s lavish claims and old-world charm.

As a kid, that wagon was mysterious and a little scary, but it anticipated adventures to come. I wanted that art in some way, but short of building and painting a wagon, how do I do it? I decided that in addition to his painted wagon, the good professor probably had a couple banners to post at the local fairs and carnivals he attended. So, I decided to replicate the wagon art as a banner. Staying true to the original was the main goal, but I did deviate a bit. I wanted the banner to look like it had lived out in the real world for a while, so I added in some staining and weathering. But I kept it subtle and closer to the edges to not obscure the main art. 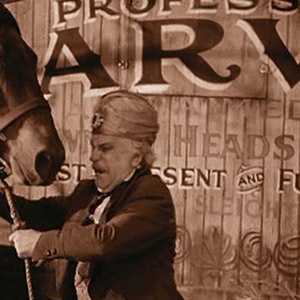 I first gathered reference material. Unfortunately, I didn’t find anything other than what we see in the film. But, by patching together the different shots in the film, I had enough reference to make a complete banner. One aspect of projects like this is the fun of unexpected discoveries. Because I’m scrutinizing an object so closely and gathering and comparing reference material, I often see things I never noticed before. The picture at the left was the first. This is the scene right after Dorothy leaves the Professor to head home. The storm is coming and the Professor is telling his horse, Sylvester, it looks like a whopper, “…to speak in the vernacular of the peasantry.” This was possibly the very first scene shot with the wagon, because the art appears unfinished. Compare it to the finished wagon above. “The Crowned Heads of Europe” is outlined, but not yet filled in. And the text for “Acclaimed by” and “…Juggling and Sleight of Hand” are lacking their white outlines. The scene goes by so quickly that it’s not surprising the producer’s thought no one would notice the unfinished art. Certainly before home video arrived decades later, it would take a very observant 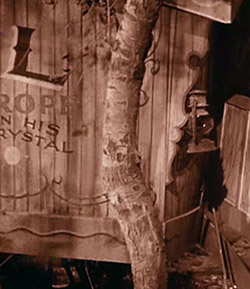 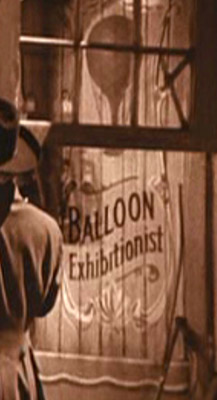 This piece of art is shown briefly in the scene where Toto is helping himself to the Professor’s dinner. It is directly to the left side of the entrance to the wagon. While I’m sure others have noticed that, it was a first for me.

So, references gathered and analyzed, I began. I had to first correct the perspective out of the film frames to get an accurate representation of the flat art. I also had to decide how to handle items that were dimensional on the wagon, such as the overhanging roof. I kept the roof design as a framing element because I think it adds quite a bit and mirrors the curve of the type. I removed all traces of the actual planks on the wagon side since I couldn’t see them being duplicated on a banner any more than someone duplicating art from a brick wall adding in a brick pattern. I wanted my Photoshop file to be large, so I would have the option of printing it in various sizes. No actual fonts could be used for the lettering because it is so distinctive, so everything was drawn by hand. This also allowed me to have a rougher edge to better duplicate the look of painted art. Once the design was complete, I started weathering it down. I wanted the letters to have a texture to them like the wind and rain had taken a toll. But, it needed to be subtle enough so it wouldn’t be noticeable from a distance. It still needed to look like the art from the film. 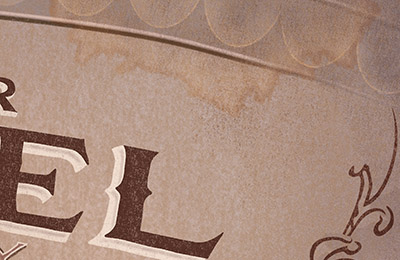 So, to the right you can see how this was accomplished. Once the design was complete, I created a custom brush in Photoshop that painted a dust-like pattern. I used that to selectively erase bits of the design to create the weathered texture. I also collected samples of water-damaged historical documents to duplicate the stains. A recent customer purchased this banner and emailed me once she received it. She loved the banner but was requesting a replacement because this one seemed to have been damaged in the mail. She was also confused how the banner could have gotten wet and stained, but the mailing tube was pristine. I thanked her for verifying that my Photoshop staining looked authentic and then explained. She replied that she had not looked closely enough at the photo when ordering and was embarrassed. She remained a satisfied customer. And, finally, here is the completed banner. 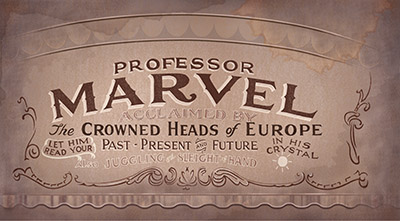 Banners are available for purchase through the Metropolis store at etsy.com. Just click the Etsy button below.