The Burgermeister’s Declaration from “Santa Claus is Comin’ to Town”

It may be impossible for kids of today to understand the anticipation of annual television traditions from decades past. Today, with You Tube, on-demand streaming, DVDs, etc., the idea that a TV show could only be seen once a year seems downright medieval. But, that rarity made them more special. And the top of the most-anticipated list were the Rankin/Bass Holiday specials. 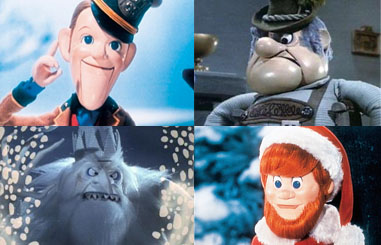 The most enduring is 1964’s “Rudolph the Red-Nosed Reindeer.” The company released several other holiday-themed shows including 1969’s “Frosty the Snowman.” Then came “Santa Claus is Comin’ to Town” in 1970. The stop-motion animation special chronicled the life story of young Kris Kringle. It told how he was adopted by elf toy makers, grew to manhood and vowed to deliver their toys over the mountain to brighten the lives of children in the dreary Sombertown. 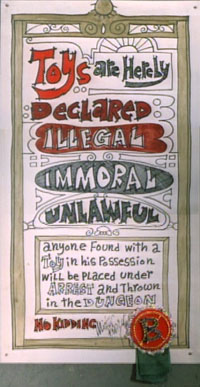 Fred Astaire was the mailman narrator (a role he would reprise in 1977’s “The Easter Bunny is Comin’ to Town”), Mickey Rooney is Kris Kringle/Santa Claus and Keenan Wynn is the frightening, then friendly, Winter Warlock. Kris’s toy deliveries are constantly thwarted by the toy-hating leader of Sombertown, Burgermeister Meister Burger.

After tripping over a toy and breaking his leg, the Burgermeister has toys declared illegal. And he posts the official declaration for all to see.

As one of those kids who loved watching these annual treats, I wanted to recreate something from the shows. The Burgermeister’s declaration seemed the perfect choice. I know the original was probably created very quickly as it only appeared on screen for a few seconds. But, the roughness of the design adds to its charm in my opinion. I wanted to recreate the uneven linework and streaks in the color. Once satisfied that the banner was correct, I turned my attention to the Burgermeister’s ribbon. The original looks to be made from common craft items, so that’s what I used. One upgrade was the actual letter B. I first attempted to cut the letter from fabric. After that disaster, I stumbled across wooden letters that were a great match. The rest is hand-assembled felt, glitter glue and craft ribbon.

These declarations are currently retired. Contact me for availability.